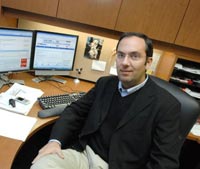 Brian Satovsky was born a salesman. His natural sales ability, coupled with the tremendous work ethic instilled in him by his parents, made him one of the most successful mortgage bankers at mortgage giant, Rock Financial. He began his mortgage career with Rock Financial in January of 1994. Like most other new salespeople he was soon cold-calling strangers and soliciting his friends and family for referrals. Through hard work and outstanding customer service, Brian was repeatedly recognized for his loan production, receiving numerous awards and commendations, during his 11 years with the company. Brian mentored many new loan officers, formed origination teams with other key personnel at the company, and became a leader within the organization, eventually becoming a Vice President.

As one of the top-producers in the company year after year, Brian participated first hand in Rock's explosive growth from 150 employees to over 2700 employees by the time he left in January of 2005. Brian's "system," experience, and knowledge allows him to remain competitive and successful regardless of whether interest rates are at 5%, or above 10%. Brian Satovsky is a proven commodity and veteran of this industry. In addition to his work Brian has spent a tremendous amount of time and energy giving back to the community.